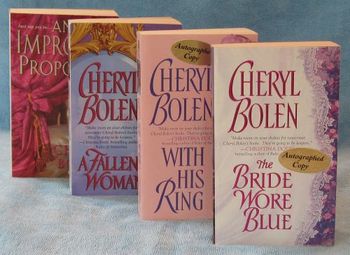 To commemorate the July release of A MOST DISCREET INQUIRY (Book 2, Regency Mysteries), award-winning, bestselling author Cheryl Bolen is having a contest to give away a complete set of the out-of-print Brides of Bath series of hot Regency novels. Originally published in 2001, 2002, and 2004, the series was re-released in ebook in 2011 with new covers. All four have been Kindle Bestsellers. (Please note the fourth book, originally titled AN IMPROPER PROPOSAL, has been retitled TO TAKE THIS LORD.)

A MOST DISCREET INQUIRY follows November's WITH HIS LADY'S ASSISTANCE, which In Print described as "a delightful blend of humor, romance, and mystery, a romp through Regency society, sprinkled with appealing characters and colorful figures from British history. Protecting the eccentric Prince Regent from an unknown assassin has never been so entertaining."

A MOST DISCREET INQUIRY

It all started quite innocently when Lady Daphne Chalmers' duchess sister came to her sleuthing sibling for help in retrieving love letters she wrote to Major Styles, now deceased. But as Daphne and her own lover, Captain Jack Dryden of His Majesty's Hussars, join forces to track down the letters, they follow a trail of treachery and murder that threatens the entire kingdom. (Book 2, Regent Mystery Series)

Check out Cheryl's Facebook page and blog for up to date information.